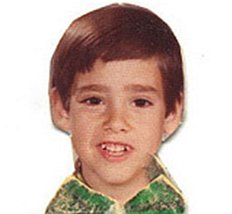 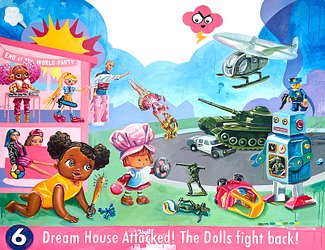 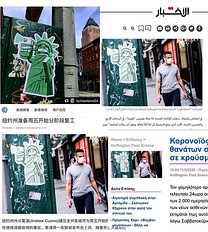 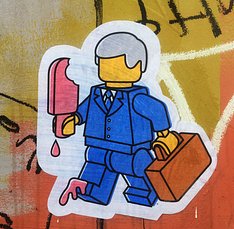 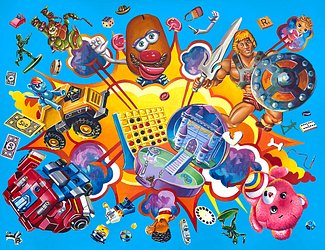 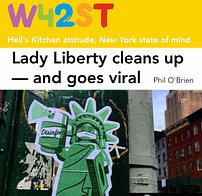 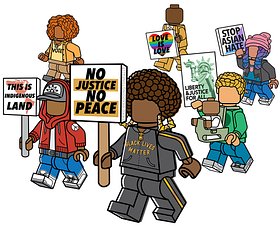 Originally from Los Angeles, RAD is an artist and educator based in Harlem, New York. He’s been teaching art to children since he graduated with a major in Fine Arts and a minor in Art Education from The School of Visual Arts in Manhattan.

RAD creates paintings, collages, murals, printmaking, digital and mixed-media pieces which aims to stay true to the spirit and vitality of one’s youth. It’s an ethos that is exemplified in his character Forever Young, a walking LEGO minifigure wearing a blue suit and briefcase enjoying a dripping pink popsicle.

When children play with toys, their action figures and dolls engage in a dialogue as they attempt to make sense of information gleaned from television, films, intrnet or their family. It’s the earliest form of storytelling, in which their values are being molded. Such storytelling continues when children draw. Narratives form with each line put down on paper. This is what has informed RAD's art.

Having immigrated from Cuba, his mother would watch daytime soap operas to learn English. The characters, plots and world building had an impression on RAD at an early age. He eventually developed the idea of fictitious town of Raddington Falls where his cast of LEGO minifigures would live and carry out an ever changing narrative. The town seems ideal on the outside, yet it has a darkness underneath the surface.

While much of his work is a pastiche of iconography and styles from popular culture, some of his work taps into the political, cynical side of adulthood. It’s these dualities between child-like imagery contextualized through an adult’s point of view, which adds tension and dimensionality to the art work.

The impetus for The Toyland Wars series was the January 6th inserurrection of the capital of the United States of America, from the point of view of a child.

Children make up stories while playing with toys to try to make sense of their world. This series follows a child centric narrative, where toys live in a fantasy world called Toyland. It’s a narrative which follows the toy green army, a fascist militia intent on starting a coup. The rest of the toys in Toyland, who normally keep to themselves in their own neighborhoods, for example, dolls, action figures, building toys, board games and stuffies live isolated from each other, must decide to band together to fight back their common enemy.

Paintings and drawings follow this “what if” scenario in battle scenes and moments of solidarity and desperation, where the outcome is uncertain.